After tracking down and hacking into google servers we tracked down one of the best yet super batshit crazy movies ever made. We met the mind behind this film an decided to have chat about why he decided to make this film and why he likes to make films in Ethiopia.

First a little about him via an IMDB description;

A big fan of experimental-punk-weird music and films, Miguel Llansó studied philosophy and cinema before leaving on his many adventures, like Jean Rouch or Werner Herzog. For him, filmmaking is friendship, risk, provocation, subversion and freedom.

Miguel has mainly filmed in Ethiopia, his second home. “Where is my dog?” and “Chigger Ale” – both made in collaboration with his friends Yohannes Feleke and Israel Seoane – were premiered at International Film Festival Rotterdam and Locarno and screened at BAFICI, Tampere, Hamburg and more than 50 international film festivals. Also Sundance, Milano, Brussels, Rio de Janeiro, Odense and many other film festivals have shown selections of his works.

Whats the film about?

Gagano are tasked with the mission of destroying a computer virus called “Soviet Union”. They enter the system using VR but the mission turns into a trap.

This synopsis, while aptly describing the major plot, is deceptive. In a good way. Because the film hides many surprises such as Batfro(a hilarious take on batman) who rules this country called Bete-Ethiopia, ninjas wearing mesobs for hats and a heist involving these ninjas in an awesome heist to steal the ark of the covenant from a warrior monk. All this inside a virtual reality where Stalin is fought by two CIA agents donning Richard Pryor and Robert Redford masks. And it’s actually good.

“I don’t consider myself as a Spanish filmmaker. I like to make films that involve people from many place. Filmmaking is a creative passion I take as an adventure rather than a business. When I first heard about Ethiopia , I was fascinated by the legends and the heroes from there and then I got the chance to work at the Spanish embassy in Ethiopia after I met an Ethiopian, who later became my friend and producers. So when I moved back I noticed that different things from different times coexist comfortably. Besides all the culture, there are very different landscapes that are created because of globalization. There is Sheraton, then there is a poor neighborhood right behind it, there are Michael Jackson look-a-likes performing at Fendika. The surrealism is all over Addis Ababa. The café with an airplane coming out of a building. It’s everywhere. So when I put Hitler and Stalin and batman (batfro) in my films, it is to create a reaction that invites reflection on this.

We didn’t follow the classic production process. We first wrote many versions of the screenplay. It took me around three years to write it. Knowing that this film will be a little crazy and outside of what audiences are used to, we decided to shoot a trailer, what some would call proof of concept to crowd-fund some money for the film. These campaigns not only bring money but also attention from people that like these types of films and the press. Cannes, frontiers, has an industry market side, where unfinished films go to find additional support to finish the films. They called us to participate and we like “yeah!”.

We also decided not to make the film in one go. We filmed it at different stages which allowed us to get more people involved gradually. Which later on got us access to more funding. Because at the beginning people were skeptical with just the script but as we gathered our footage and put out additional videos for the campaign, it became more easy to sell people on the idea and create an audience for it. We could easily show the people the surreal elements, the funny stuff and what we eventually want to accomplish.

And most of the people that supported us, didn’t do it expecting monetary gains but because they liked what we were aiming for and the concept which looked a little bit like a superhero film. We spoke to the enthusiasts to create interest in the film and gain their support. Get people that want to contribute or collaborate somehow. For instance, I knew a guy that did VFX work for Hollywood on movies like Mission impossible who was interested and I told him look “look I don’t have a million euros” and he helped us on creating the look for the film during the weekends. In cases where the budget didn’t allow us to directly pay the people we would negotiate special deals where we would pause certain parts of production until we gathered enough to pay the creatives involved. 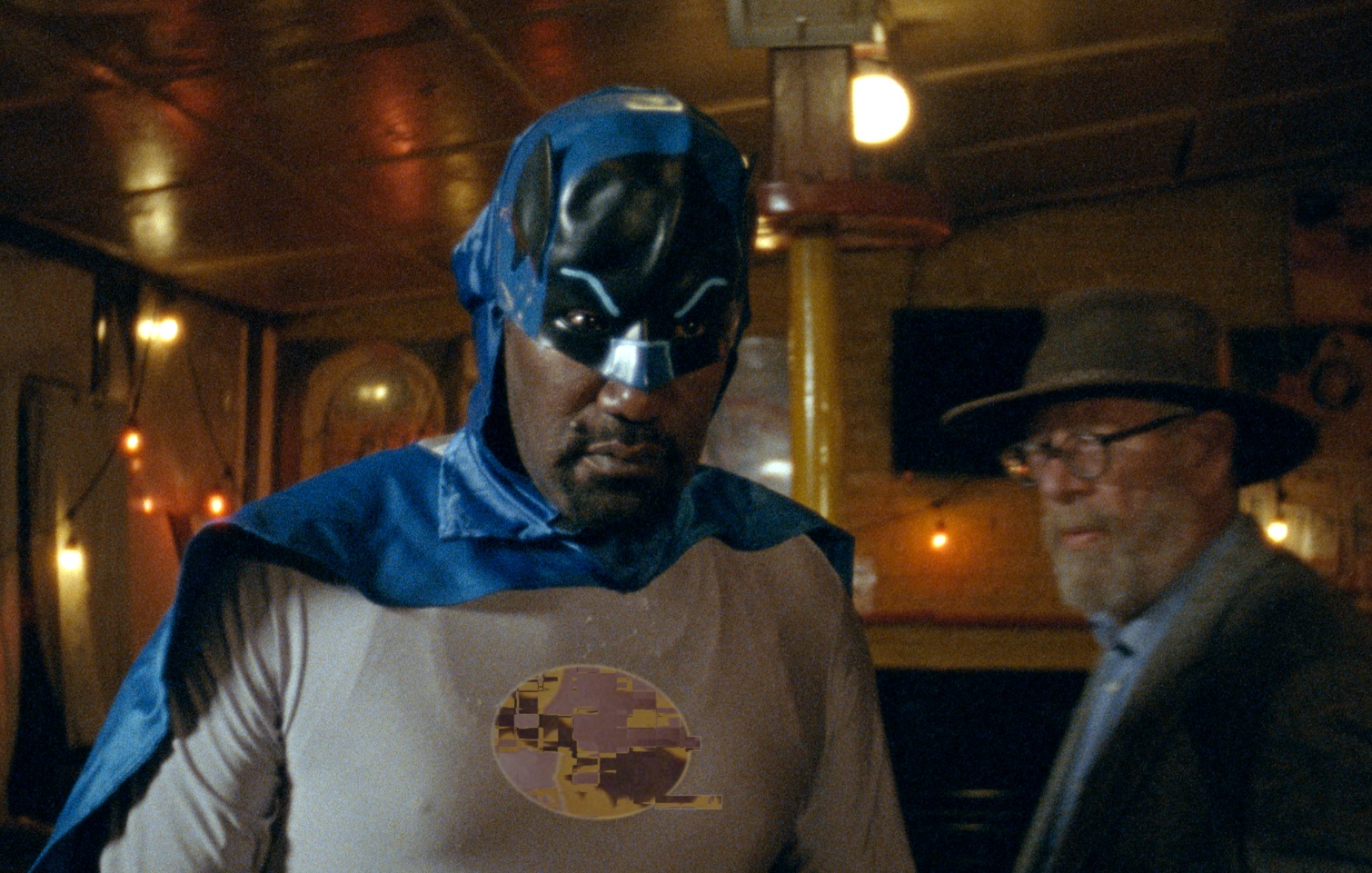 When we casted Daniel Tesfaye Gagano I wanted to create a character around him. He is a fascinating person. When you see him you see bravery, he also has a great sense of humour and I wanted a hero that wasn’t the typical Brad Pitt style hero but more of a smart and tragic hero. Someone that doesn’t always win but someone who is more like a person. That was Daniel for me. When we started to shoot , he sort of had the tendency to overact but then once he got comfortable on set he immediately understood what the script called for. Here he plays a CIA agent and in Crumbs he plays a survivor in a post-apocalyptic world. The films are always exaggerated but I always want Daniel to be Daniel, because it gives empathy and attachment to the character. That’s how I approached working with him.

Solomon Gaga, who plays the villain in this, I see as the Ethiopian Mad Spencer. He’s a big guy and he’s very grotesque and he was perfect for the role of the villain.

In my films, I want to mix professional actors with non-actors, this is because I push to portray people as they are. For this to happen, a certain flexibility in the screenplay is required. If you attempt the same thing in a serious drama or romance, it won’t come out good. Because you need performers that find the truth in the screenplay and reflect that truth in their performance. Since our film was a little offbeat we decided to go with it. I like to show primary empathy in showing people that are themselves. For instance, the Italian, Mr. Sophistication he was just a guy we met at Juventus club and I liked how he is. In the screenplay, he was supposed to be this mafia guy but I decided to change the screenplay and I wanted him to be a mafia guy being himself. Why not let him be a mafia guy in his own image. 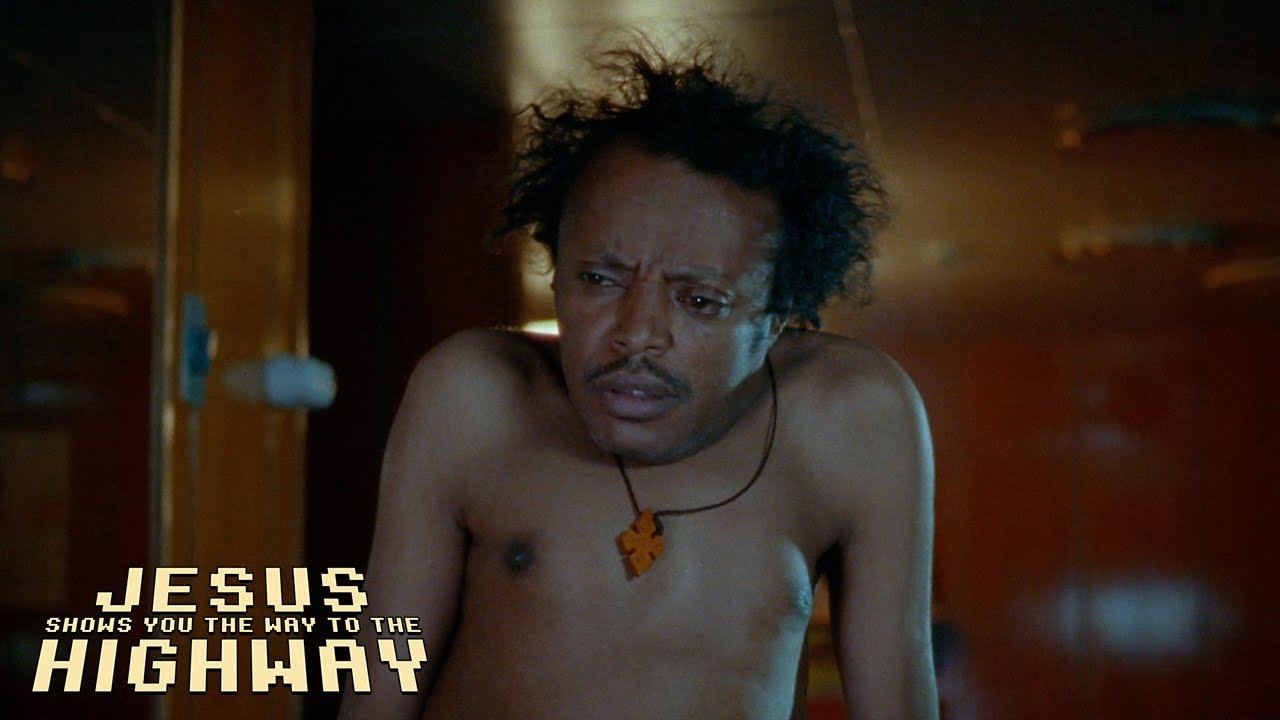 Most producers want star cast names to be on projects so they can fund it. This was a challenge so when I wrote the script I decided to have those people in a deep-fake way. Except a lot cheaper. So when the CIA agents entered the virtual reality they would appear as Robert Redford and Richard Pryor. When talking about Batfro I wanted to make him a representation about the whole culture of power. How eventually, it’s a corrupting influence both in the real world and the world of superheroes. As you’ll see in the film, Batfro is the president of the country Gagano (the main character) finds himself in, when he enters the virtual reality. This version of the superhero, does coke, he’s a dictator and kills people. So, ultimately he’s the bad guy.

Sometimes, you can see some appreciation of the characters in exaggerated films, like in Uganda’s Wakaliwood with Who Killed Captain Alex, Bat Black and others. I appreciate those movies because ultimately, they are a love letter to the films that inspired them.

It’s a pity that only DC and Marvel can use batman and other superheroes in their stories. These characters don’t belong to them anymore. The belong to the people. They can do their batman and we can do ours.

With JSTTH, I was trying to create a film that removes the viewers from the current world without straying away from it. So a lot of the locations, was a reflection of what I imagined could happen in locations I visited. Like a cold war bunker in Estonia I visited, it was fascinating and interesting. Most people are always focused on the story that they forget that it’s important to look beyond it to. Yes, story is important but at the end of the day, a film is a thing you see. If location is hhorrible then it takes you out of it. It prevents you from imagining and suspending disbelief. Film is the script, the location, the casting. These thing will trigger many things in your imagination. If there is weak imagery the film becomes weaker. 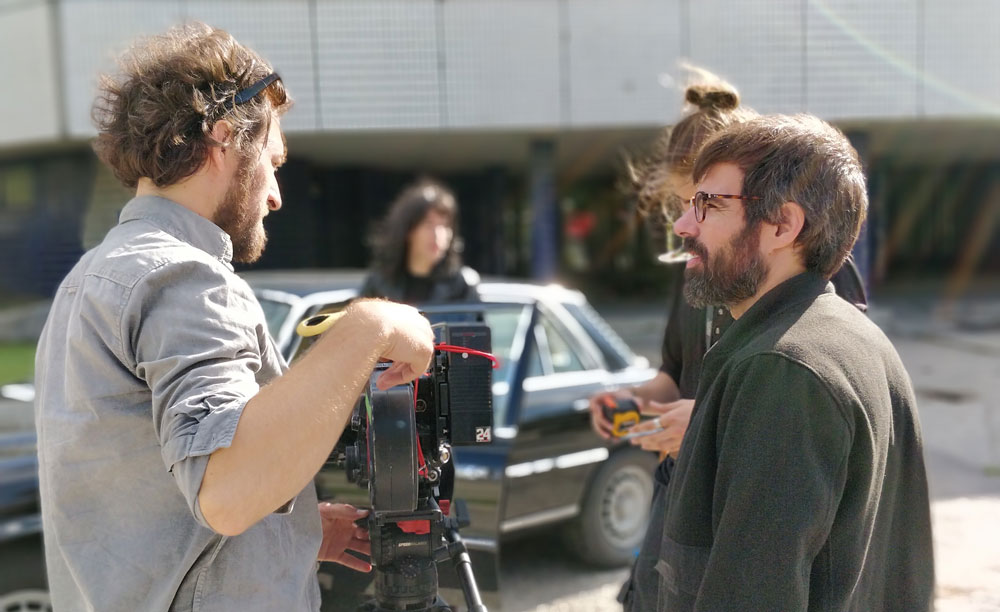 I work with small teams. This allows for more flexibility. Rather than having 20 people at a time, I’d rather have a smaller team to create a manageable atmosphere and more travels. I never had a fixed number of crew members, they fluctuate depending on the scene we were shooting. It’s not a good idea to have a fixed vision of what a crew should be. Sometimes, filmmakers do a disservice to themselves by sticking to that idea of what a film and crew should be that they create unnecessary challenges. First time filmmakers also tend to set standards way to high like, we need 1,000,000 lights or it doesn’t look professional. That’s not good. Sometimes, maybe you need to have a well lit location and maybe not use as many lights. In that you create a unique atmosphere for your scene and story.

One thing that helps with challenges, is preparation. This is cheap and effective. Preparation is just you and your colleagues planning out scenes and finding the locations and coordinating with casts to save not only money but also your crew’s time. It’s what saved me a lot of heartache while shooting my film.